Cardinals History of 13: The Luckiest Number

A look at the Cardinals players who wore the number 13

Share All sharing options for: Cardinals History of 13: The Luckiest Number

There are 13 days left until the Arizona Cardinals kick off their regular season.

When Cardinals fans think of the number 13 they (should) automatically think of Kurt Warner. In four too short seasons Warner began the transformation of the Cardinals franchise, kick starting the team into a new era for Cardinals football. Before Warner arrived, few Cardinals fans can forget the decade of inept management and ownership that consistently lead to a losing product.

Kurt was considered a player gone over the hill before coming to the Cardinals, he came into the league as an older player and after three fantastic seasons his play had plummeted so far he was replaced by Marc Bulger. Despite poor play for both the Rams and Giants, Warner was given the starting job by former… coach/draftnik, Dennis Green. Though his starting job didn't last long as three games in Warner was injured. Fans began to throw around the injury prone label at the 34 year old quarterback. After a broken hand in New York and now a pulled groin, it wasn't looking good for our man Kurt.

However Warner’s backup, Josh McCown was unable to take advantage of the situation and was benched for Warner who ended the season on a high note and a three year contract from the Cardinals.

The following year the Cardinals drafted Matt Leinart. Many fans were excited for Leinart after experiencing his incredible college career. Warner was given the starting job but was shown the bench after having two up games and then two down games. Leinart played well, at first, but had some shaky games (and one 400 yard game against Minnesota). For a moment, Leinart was exciting and brought hope to the fan base but was derailed (permanently it seems) by a broken collar bone in week 16. 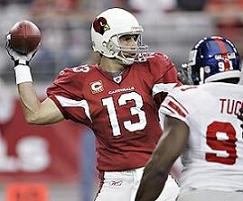 And, I feel like I have said this before, Warner was thrust back into starting action and finished the season with a bang.

2007 season rolls around and Warner finds himself on the bench, again, but this time by a new head coach. (If I told you this story without you knowing what happened to Warner, you would assume I made it all up.)

Regrettably for Leinart, it appeared his broken collar bone had done something to his game. He became Captain Check-Down and old Ken Whisenhunt wasn't having none of that. Warner was (again) placed into the starting roll week three and the rest is history. Kind of. Warner wasn't great in 2007 but for a 36 year old he looked damn good.

Now the rest of the story you remember well and it’s too bad Warner wasn’t able to bring home a trophy. What he did bring was change to an organization and a fan base. Fans started to expect to see a good product and had blood in their mouths after a trip the Super Bowl. Look at us now, a good HC and GM and finally the right kind of ownership.

However, if you noticed above, I said 13 is almost the luckiest number for Cardinals fans. It brought us a lot, but not everything. That could change though. While this new 13, Jaron Brown, will likely never have the impact the old one did, this new 13 is starting to make me believe. UDFA to all-time-great? Us Cardinal’s fans can only hope…

Other historic Cardinals players who wore 13:

Countdown to kickoff: The history of different uniform numbers