The undrafted rookie could be gone soon, or perhaps it was a glitch.

One of the surprises on the Arizona Cardinals 53-man roster was undrafted rookie linebacker Glenn Carson. He made the squad, but then, late Saturday night, the team website made for some interesting speculation.

When I was putting together my article on the team's depth chart (will publish Sunday AM), I noticed that Carson's name wasn't on it.

That prompted me to look at the roster and he wasn't there, either. 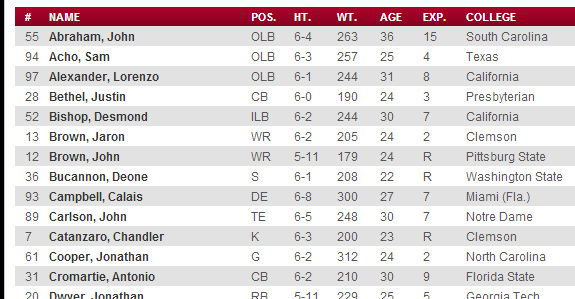 Since Carson is likely the last of the 53 players on the roster, it raises speculation that there was going to be an announcement coming about his release and the addition of a different player.

His name did return and Darren Urban suggested that it was a glitch.

Sunday and maybe Monday will tell us more.

If it turns out that Carson ends up off the roster, it is a way to sneak him onto the practice squad. Sunday is when teams can begin filling their 10-man practice squad, but players have to clear waivers first. Keeping Carson an extra day on the "final" roster and then releasing him a day later would push him to clearing waivers on Monday, which is after teams might have filled their squads. That would make it a little easier to bring him back.

Of course, it might have been just a glitch. But when it is the 53rd player on the roster, it is exactly the sort of thing that will start speculation. Who takes his place? Is it a trade? Did the Cards get a waiver claim? Will he be brought back to the practice squad? Or was it just a coincidental glitch?