The Return of Tyrann Mathieu

The return of Cardinals defensive back Tyrann Mathieu after a serious injury in 2013.

Share All sharing options for: The Return of Tyrann Mathieu

In 2013 the Arizona Cardinals drafted 5'9, 186lb, then suspended LSU football star Tyann Mathieu in the third round. The pick went with mixed reviews that all seemed to border on the extreme; people either loved the pick or hated it.
Mathieu's plight is well documented, a kid from a troubled neighborhood who despite immense football talent and the promise of an NFL future, couldn't kick bad habits and thus was ultimately suspended from LSU's football team.

If you are an LSU fan, or even just a college football fan, you were probably one of the individuals who loved that the Cardinals selected Mathieu. As just a sophomore at the powerhouse LSU was, Mathieu had cemented a college legacy for himself due to his tenacious play. It all started Mathieu’s freshman year were he earned first team snaps on an extremely talented LSU secondary featuring three future first round draft picks in Morris Claiborne, Patrick Peterson, and Eric Reid. 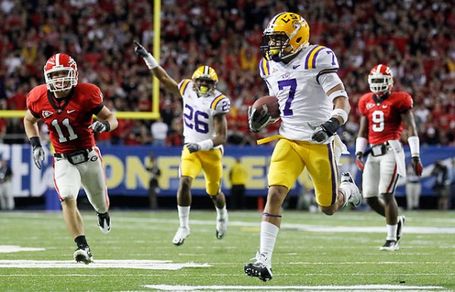 That year, in 2010, Mathieu accrued 59 tackles, 3 sacks and 2 interceptions. He was awarded the "Most Outstanding Defensive Player" for his efforts in the 2011 Cotton Bowl Classic. As a sophomore Mathieu accumulated 77 tackles, 1.5 sacks, 5 forced fumbles, 4 fumble recoveries (2 for TD’s) and 2 interceptions (Uh, wow). But the fun didn’t stop there, Mathieu also returned two punts for two touchdowns along with several other highlight reel returns. For all his work Tyrann earned the Honey Badger moniker that so aptly fits his profile; small, but seriously dangerous.

During that incredible 2011 season Mathieu was voted the MVP of the 2011 SEC Championship, a finalist for the Heisman Trophy, the Chuck Bednarik Award, the SEC Defensive Player of Year, and a Consensus All-America. The Honey Badger was one of the most popular players in college football, but like many in the limelight, with added acclaim comes added pressure. That pressure and a poor understanding of consequences led Mathieu to suffer a huge blow to his career prospects as he was suspended from LSU due to multiple failed drug tests. 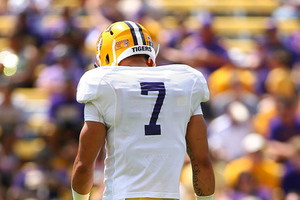 Kicked from the team but not from LSU, Mathieu stayed at LSU and enrolled in classes. It appeared to be a smart decision, showing some maturity as he picked education and loyalty to LSU rather than just ship to a NCAA FCS team. But despite these actions it came out that Mathieu had actually failed to learn from his mistakes as he was arrested a month later for possession of marijuana. It appeared to the world that another great athlete and future NFL player would succumb to a weak mental fortitude and an addiction to self-destruction.

In 2013 Tyrann Mathieu entered the draft and immediately got the talking heads prognosticating the Honey Badger’s chances in the NFL. Like the fans, the pundits were divided with some believing him to be an elite and special talent while others thought this drug problem would lead to his undoing. Many thought he should return to college football as his stock had plummeted too far.

None of that stopped the Arizona Cardinals. The Cardinals, led by a vastly improved front office, saw a different side of Tyrann Mathieu. His closest friend and claimed "brother from another mother," Patrick Peterson was able to give the Cardinals a deeper look at what made Tyrann Mathieu tick. They saw that Mathieu was troubled but not trouble. They took the risk and with the 69th pick in the 2013 NFL Draft the Cardinals selected Tyrann Mathieu from LSU.

There are few players that enter the NFL and make an immediate impact. Cardinal’s fans have been lucky to see a few such player, such as Larry Fitzgerald, Anquan Boldin, and Darnell Dockett.

Throughout the preseason the coaching staff raved about Tyrann Mathieu. HC Bruce Arians gushed over his instincts, GM Steve Keim loved his natural playmaking ability. Well it only took one game for the new Cardinal to live up the off-season hype; off-season hype that often leads to disappointment. In the first game of the season against the St. Louis Rams, Mathieu made an incredible play. Ram’s TE Jared Cook had slipped coverage and was wide open with nothing but green grass ahead of him as he caught Sam Bradford’s pass. With his speed it was a forgone conclusion that he would score, but then out of nowhere the Honey Badger struck, diving from behind Cook on the 9 yard line and punching the ball out, saving touchdown and giving the Cardinals the ball back.

Really words don’t do the play justice as it was simply incredible.

Mathieu didn’t stop there, next week against the Detroit Lions, on a pivotal end of the fourth quarter fourth and 4, the Lions lined up 3 wide. Tyrann Mathieu was lined up in man coverage against 6’0 198lb Nate Burleson. Lions QB Matthew Stafford attempted to pick on the diminutive defensive back but was paid in kind as the Honey Badger assault Burleson, keeping him well short of the first down and securing the Cardinals their first victory of the season.

Over the course of 13 games the Honey Badger collected 68 tackles, 65 of them solo, a sack, a forced fumble, two interceptions, nine passes defended, and five tackles for loss. His impact was immediate. If not for the injury it is likely Mathieu would have been the first DB to have won the Defense Rookie of the Year award since Charles Woodson in 1998.

After a prolonged off season of recovery, Mathieu is finally playing again. In week two he saw his first snaps of the year, getting on the field five times. In week three Mathieu played 15 snaps and so far has looked apprehensive. He has given up four catches on four targets for 28 yards with seven solo tackles thus far on 20 snaps. It is apparent his ability to tackle is still there, but the rest of his game hasn’t caught up yet. 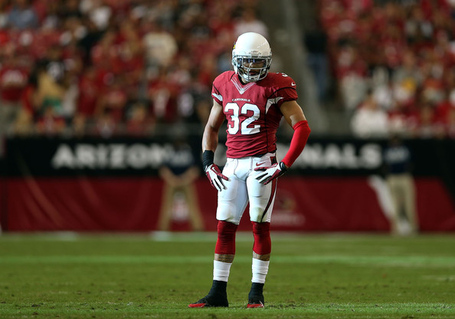 What we can expect from Tyrann Mathieu is an unknown so far. Generally an early bye week is a curse, but for the Arizona Cardinals it may be just what the team needs. With extremely well documented loses on the defense, the Cardinals need players to step up. So far that has been happening. UDFA Tony Jefferson has been a revelation in year two, Antonio Cromartie looks like his old self, Deone Bucannon has played great football as the "Dollar Linebacker" and the defense has continued to hold teams out of the end zone when it matters most.

But the defense has shown weakness, such as an inability to get to the passer with just a standard rush and weakness to quick passing games targeting the middle of the field.

Adding a healthy Tyrann Mathieu can only help. His ability to play everywhere creates matchup nightmares. With Jerraud Powers currently struggling with the volume of looks he is getting, inserting a healthy, play making Mathieu may put the defense in the conversation as best in the NFL. Todd Bowles will be able to line up Mathieu as a safety or a CB, giving the defense greater flexibility when teams try what the Niners did last week in their no-huddle offense.

Next week against the Denver Broncos, Cardinals mothership writer Darren Urban is reporting that Mathieu will see 30 snaps, two and a half times what he has seen thus far through three weeks. Against the powerful offense of Denver, in Denver, the Cardinals need the Honey Badger to increase their chances of a win. The Cardinals will be in the spotlight, undefeated, facing the media darling Broncos after a week off. Most will pick the Broncos to win but the Cardinals with a healthy Tryann Mathieu and Carson Palmer may be one of the hardest teams to beat in the NFL.

Until then, enjoy some Honey Badger highlights: