Arizona Cardinals vs. St. Louis Rams: Two teams with something in common

Share All sharing options for: Arizona Cardinals vs. St. Louis Rams: Two teams with something in common

How far back can we trace the history between the Cardinals and the Rams? All the way to October 3, 1937, when the Chicago Cardinals defeated the Cleveland Rams 6-0 in a real thriller at League Park in Ohio. The Big Red went on to win the first four games of the all-time series that now finds the Cardinals leading 36-35 (with two memorable ties).

Of course the Rams and the Cardinals have something in common that first became possible when Violet Bidwill moved the world's oldest professional football franchise that became the St. Louis Football Cardinals in 1960.  Soon after, future Cardinals president Michael Bidwill was born under the Gateway to the West (well, not literally).

There have been numerous versions of Cardinals/Rams over the the years and both teams have played as home teams in the shadow of the St. Louis Arch (where the Greatest Cardinal Ever played).

The simple way to show the history between the teams would be a list with the Cardinals' won-loss records (or for a complete game-by-game breakdown, click here).

Many variations on the same theme which also includes this footage from a preseason contest using an experimental white football for night games — complete with up-close and personal photographers' flashes!

The teams have met once in the postseason (a game we're not going to talk about), and although no championships came through the city of St. Louis for the Cardinals, the team gave many fans a thrill. 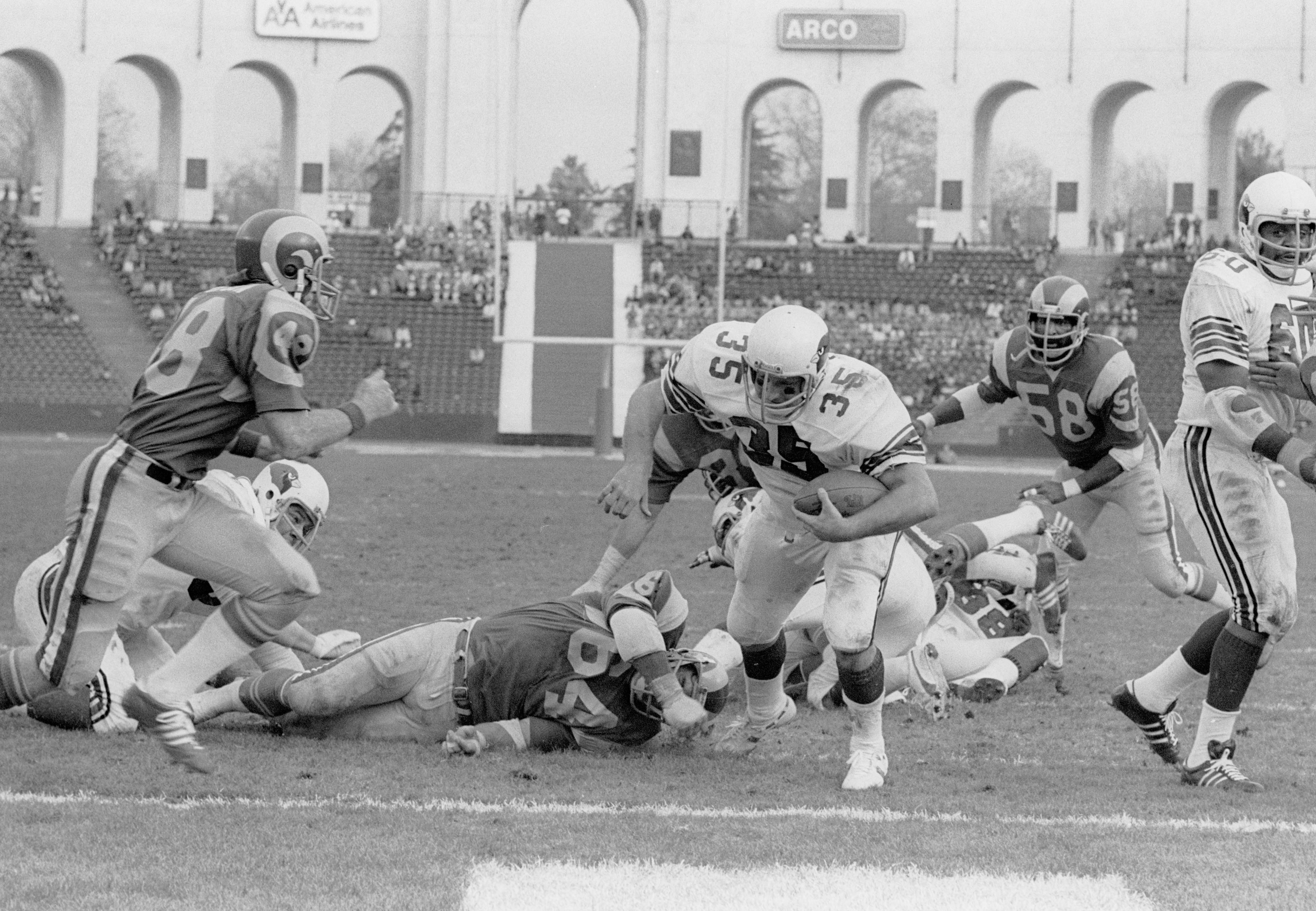 ... on an overcast day at the L.A. Colosseum in 1976, when true to their name, the Cardiac Cardinals who trailed 21-6 in the second half, methodically went about their business (as if it was scripted) to claim the 30-28 victory with a Jim Bakken field goal at the gun over the Los Angeles Rams.

This game also saw Merlin Olsen (Father Murphy) walk into the Cardinals huddle, wave his finger and say bad things to Conrad Dobler, then walk off the field never to return. Why do I remember this Cardinals/Rams game? I was there.

Three Hall of Fame inductees played for both teams in the past — Dick 'Night Train' Lane, Ollie Matson and Aeneas Williams.  Another former great expected to join that list would be Kurt Warner.

Other players that donned both Cardinals and Rams uniforms include Ernie Jones, Eric Hill, Kwamie Lassiter, Corey Chavous and Chris Chandler, while local favorite Ron Wolfley is the only NFL player to have ever played for both the St. Louis Cardinals and St. Louis Rams.

• Only two years removed from their 1947 world championship team, the Chicago Cardinals overcome a 21 point deficit against the Rams in Los Angeles behind the rushing of Charley Trippi and 3 picks from Jerry Davis to prevail 31-27 in December 1949.

• Busch Stadium in December 1972 was where Jim Hart (the Card's all-time leading passer) tied the longest pass play in franchise history with a 98-yard strike to Ahmad Rashad (then known as Bobby Moore) in the 24-14 victory over the  Rams. This play remains the longest non-scoring pass play in the history of the NFL and a record that will never be broken.

• In the first season as the Phoenix Cardinals (1988), Neil Lomax passes for 342 yards as the Big Red rack up 519 total yards against the L. A. Rams. Touchdown receptions by Roy 'Jet Stream' Green and Jay Novacek, in addition to TD runs by Earl Ferrell and Stump Mitchell add up to a 41-28 victory and Lomax is named NFL Offensive Player of the Week.

• Ronald Moore rushes for 126 yards and 4 touchdowns in the team's last season known as the Phoenix Cardinals and becomes the Offensive Player of the Week.  Steve Beuerlein also adds a touchdown pass to Gary Clark (8 catches for 159 yards) in the 38-10 victory at Sun Devil Stadium in '93.

• Kent Graham passes for 366 yards in the Arizona Cardinals come-from-behind overtime 31-28 victory in Tempe in 1996 over the St. Louis Rams. A whopping 13 of Graham's 37 completions went to Larry Centers for 83 yards and a touchdown. Other Cardinals scored that day by the names of Rob Moore (9 catches, 143 yards), Leshon Johnson and Frank Sanders.

• In the first quarter of the season opener of his rookie year (2013), Tyrann Mathieu comes from nowhere to knock the ball loose from TE Jared Cook just as he's about to cross the goal line in St. Louis. This game is also notable for when Bruce Arians first came to realize that Levi Brown wasn't so elite after all.

• Carson Palmer completes 27 of 32 passes (84.4%) for 269 yards and a touchdown in 2013 in Glendale. The 84.4 completion percentage was the second-best single-game completion percentage in franchise history (only Kurt Warner's NFL-record of 92.3% in '09 ranks higher). John Abraham records three sacks as the Cardinals win 30-10.

Since the teams became division opponents in 2002, the Cardinals hold a 15-11 advantage and are currently riding a 3 game winning streak over the Rams.  The Cardinals in a homecoming of sorts in St. Louis, prevailed in a battle of field goals 12-6 last December when the teams last met.

Odds are the score will be much higher this Sunday especially if Larry Fitzgerald has anything to do with it.  Fitz's 138 career receptions, 1,631 yards receiving and 16 touchdowns against the Rams are more than any active player against an individual opponent.

It's almost time to snap on the chin-straps again for a Cardinals/Rams game and you know what that means ...

Bad News for the Rams!