Many players that have worn today's jersey were here and gone. With 95 days left 'til kickoff, let's see how many of these guys you remember that wore No. 95. Good luck!

As we've learned in previous episodes, there haven't been many players that have worn numbers in the 90's for the Cardinals in a history that spans back to the end of the nineteenth century.  So another short-story today even though today's No. 95 leads the pack in the number of players wearing any of the 90's jersey numbers.

There's a very good reason (or very bad reason rather) for so many No. 95's because eight of the twelve players to have worn the number have been 'One-Hit-Wonders' — players who were on the team for only one season (or less) then vanished.

But let's begin with the exceptions and with the only player of note by the name of Jamir Miller (1994-1998).   Drafted in the 1st round (10th pick) of Buddy Ryan's first year in the desert, Miller (pictured abvove) had three excellent seasons (for the Cleveland Browns) after putting in five years of hard training in Flagstaff.  Not that he played poorly in Arizona, it's just the 13 1/2 sacks in 5 years in the desert compared to 22 1/2 sacks in 3 years with the Browns ... 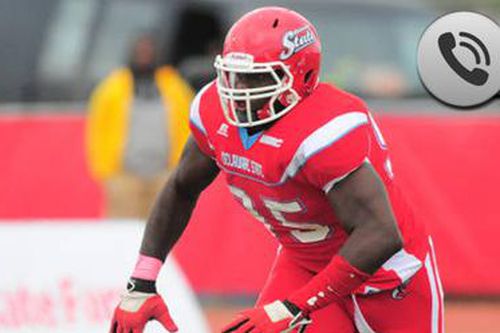 Rodney Gunter who seems a bit old for a rookie if you believe this profile. Nonetheless, the Cardinals hope that Mr. Gunter becomes anything but a 'One-Hit-Wonder'.  His story reads like a movie script and the Cardinals hope it has a happy ending.

Jess Root (who knows something about rooting) tells us why we should root for Rodney to be the player to finally claim the BIG NINE-FIVE for himself (his college number by the way) in this excellent article.  I know I'm rooting for the kid.

As usual, please join in the discussions about our players of the day (that's what this is all about after all).