Only half a dozen players have worn No. 92 for the Big Red and a player switching numbers this season will make it a lucky seven. Who's the best so far and who's switching jersey numbers?

Yet another day closer to the kickoff to the regular season and yet another small batch today of players who've worn a jersey number in the 90's.  With the records for uniform numbers only going back to 1950, we know of only one player who wore a number in the 90's for the team previous to the 1986 season in St. Louis.  That lone exception of course would be Marshall Goldberg — retired jersey No. 99 (from the first story in the series).

Today we have a grand total of six players who have worn jersey No. 92 for the Big Red, and a player we all know that has just switched to today's number to make it a lucky seven.

Dexter Manley starting things off in the desert for the BIG NINE-TWO in 1990, when he spent a season with the Phoenix Cardinals after a very productive career with the Washington Redskins.  Dexter appeared in four games and started in none, accumulating zero tackles and zero sacks.

Next came Eric England (1994-1996) who racked up a total of 16 tackles in 3 years followed by a One-Hit-Wonder (played for the Cardinals for only one season) by the name of Angel Rubio (1999) who added his NFL career total of 2 tackles to the cause.

Finally things began to look a little brighter when defensive tackle Barron Tanner (2000-2003) recorded 3 sacks, 79 tackles, an interception and a forced fumble in his four years in the desert.

But it wasn't until Bertrand Berry showed up in town for a player to lay claim on No. 92 for the Arizona Cardinals.  Starting off by leading the NFC in sacks (14 1/2) his first year, Bertrand (pictured above) immediately endeared himself to the fans and remains a very popular figure as a local broadcaster.

Although suffering through his fair share of injuries (starting 52 games over 5 seasons), Berry (2004-2009) still managed to add 40 sacks, 125 tackles and a very impressive 11 forced fumbles and 8 fumble recoveries to his permanent record.

Bertrand Berry was also a member of the Cardinals NFC Champion team of 2008.

Recently departed Dan Williams (2010-2014) played five years in the desert after being selected in the first round of the 20120 draft and was another popular player who contributed 113 tackles and 50 assists.  We all suffered with Dan Williams after his personal family tragedy and wish him luck.

And now for the new bearer of the torch for the BIG NINE-TWO. 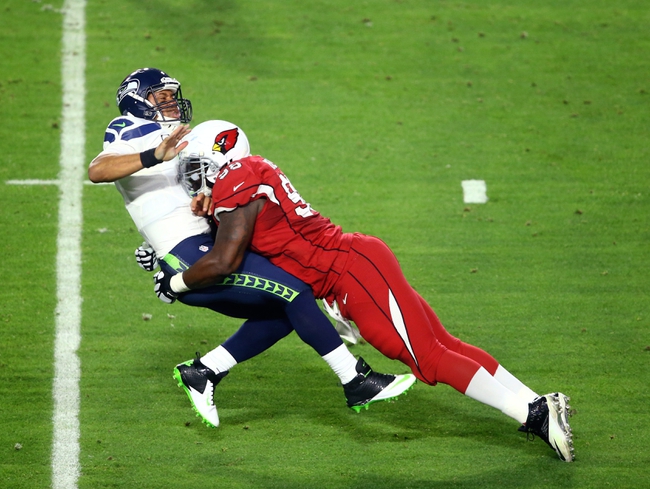 As mentioned in the previous story, Frostee Rucker (entering his third season in Arizona) switches from No. 98 this year to No. 92 — his number in his Bengals and Browns years.  Let's hope Frostee turns out to wear today's number best and repeats what's pictured above  — over and over again.

Please help us fill in the gaps with your memories of these players, including links, pics and stories and don't forget to vote on your favorite No. 92.  And bartender, would you be so kind as to serve up a round of Frostee beers on the house for this special occasion please.