Today's No. 81 must surely be the number that more Cardinal greats have worn than any other. Find out what we mean and then good luck when it comes time to vote — you'll need it.

It would be safe to say that No. 81 has been better to the Cardinals than any other jersey number in the history of the franchise.  But it also makes for a tough choice when voting on today's poll on who wore it best.  So with 81 days remaining until the kickoff of the 2015 season, let's look at why the BIG EIGHT-ONE has been the best-ever for the Big Red.

As usual we'll list all the players that have worn today's number chronologically making note of those players that mattered along the way — and in today's case, that would be many of them.

Dick 'Night Train' Lane (1954-1959) was one of the most feared names in the history of the National Football League for obvious reasons.  Truly one of the greatest players in history of the game that ever snapped on a chin-strap, 'Night Train' would also lead the list (or at least started the list) of those players who the team should have never let get away.

Wearing No. 81 on his back as a cornerback for the Chicago Cardinals, Lane struck fear into the hearts of eligible receivers all across the league with his punishing style of play.  Lane played 6 years for the team where he ranks 4th All-Time for the Cardinals in career interceptions with 30 (12-game seasons mind you), and even chipped in on offense (31.6 yards per reception) including a 98-yard touchdown reception in 1955 (tied for 1st for the franchise).

We could go on and on, but just listing a few more accomplishments in the career of Dick 'Night Train' Lane will suffice:

Still holds the NFL season interception record with fourteen!
(in a 12-game season no less)

And for the truly 'Elite of the Elite'

Jackie Smith (1963-1977) played 15 seasons for the Big Red as one of the best tight ends in the game (5 consecutive Pro-Bowls) whose career spanned all the way through to those silly Cardiac Cards of the mid-70's.  As a prototypical tight end of the day that knew how to block and did it well, Jackie still managed to account for 480 receptions for 7,918 yards (3rd All-Time Cardinal) and 40 touchdowns (6th) in his career in St. Louis which included 121 consecutive games started.

Jackie Smith was also inducted into the Pro Football Hall of Fame — not bad for a 10th round draft pick who also doubled as the Cardinals' punter 198 times.

I remember game two of the 1981 season well when the Dallas Cowboys scratched their heads and wondered what was up with the Cardinals free safety (wearing No. 25) trotting into the offensive huddle.  A few seconds and 60 yards later they witnessed the debut of Roy 'Jet Stream' Green (the receiver) to the National Football league.

The quarterback that tossed Green's first pass reception was none other than Neil Lomax in his first NFL start and 'Lomax to Green' turned out to be a thing of beauty while it lasted (48 TD's).

Roy continued the season as a two-way player — the following week snagging a touchdown reception and then sealing the deal with the game clinching interception! Two years before in his rookie season, Green set the Cardinals' record that still stands for longest kickoff return of 106 yards.

Green (pictured above) then changed to No. 81 as a full-time receiver and for those that saw him run, it was no wonder he was referred to as 'Jet Stream' for his fluid stride and blazing speed.  In total, Roy number's with the St. Louis/Phoenix Cardinals (1979-1990) were 522 receptions for 8,496 yards (2nd All-Time Cardinal) and 66 touchdowns (ditto).  Not bad for a player selected in the 4th round as a defensive back.

Anthony Edwards (1991) spent his rookie season wearing No. 81 before changing numbers the next year (see story No. 83) and was a very good special teams player who also caught 5 touchdown passes with the team.

Frank Sanders (1995-2002) wasn't too shabby himself during 8 seasons with the Cardinals through those lean years in the desert (which wasn't his fault) and notched impressive totals of 493 receptions (5th All-Time Cardinal) for 6,579 yards (7th) and 24 touchdowns on his permanent record.  Frank was also the team's leading receiver when the Cardinals shocked the world by beating the Cowboys in Dallas in the first round of the 1998 playoffs.

Anquan Boldin (2003-2009) was a sure handed receiver for the Cardinals and a favorite target of Kurt Warner in the the Cardinals' Superbowl season of 2008.  In his 7 years in the desert, Boldin accounted for 586 receptions,  totaling 7,520 yards and 44 touchdowns before moving on.

Big shoes to fill for the current player that wears the BIG EIGHT-ONE for the Cardinals (at press time that is) and once again we will wish good luck to a newbie (tight end Ted Bolser) with a picture of the Cardinals logo. 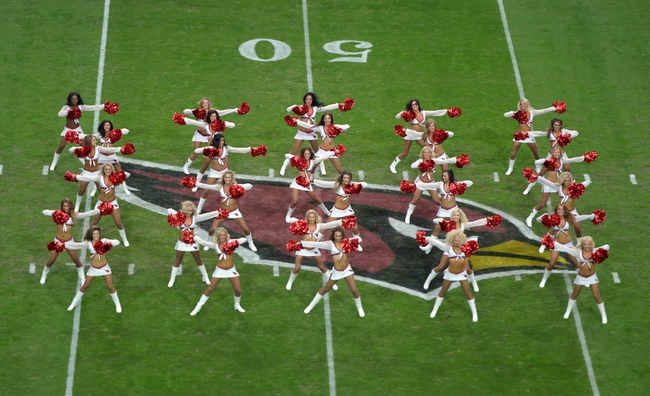 Well there you have it and wouldn't it be nice if all jersey numbers were as good to the Cardinals as No. 81.