A day closer to kickoff as we salute players who have worn jersey No. 98 for the Cardinals. Who wore it best? Could it be a first-round draft choice who never played college ball?

Let's settle in for the long haul and step through the 90's first — jersey numbers that is — where oddly enough, uniform numbers in the 90's weren't used until just prior to the 90's — well, at least since the 50's that is.  Got that?

Regardless, we know that no player ever wore No. 98 for the St. Louis Football Cardinals and the first player to wear the number we can find was Carl Hairston (1990) who played one year with the Phoenix Cardinals at the tail end of his 15 year NFL career.  Carl registered one sack in the desert.

The first player of note to wear the number was Eric Swann (1991-1999), who amazingly enough was chosen by the Cardinals in the first-round of the draft after never having attended college.  That was hard to imagine even back then and the league shook their heads at those silly Cardinals.  But it turned out the Cardinals GM understood that it's not the pedigree that counts but what you can bring to the table.  Swann (pictured above) turned out to be a great defensive tackle for Cardinals GM Larry Wilson (8).

Having missed his fair share of games due to injuries, Swann still recorded 45 1/2 sacks and 376 tackles for the Big Red and added a 42-yard interception return for a touchdown in 1999 (Eric's swan song in the desert — pun intended).

Russell Davis (2000-2005) started most every game at defensive tackle for the Cardinals in his six years in Arizona.  A productive and popular player even if not overly-impressive numbers. 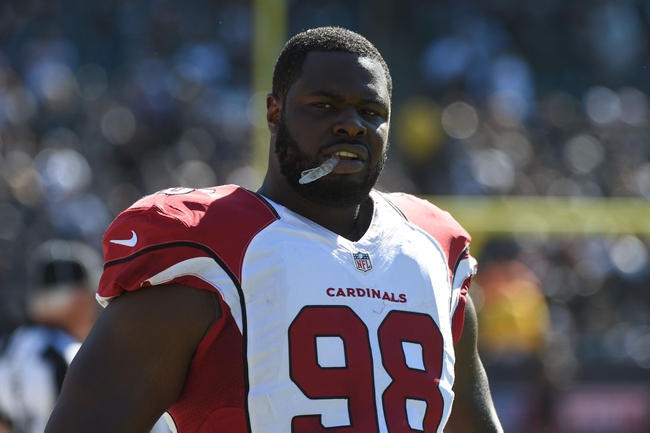 Frostee Rucker (pictured above) goes into his third season as a Cardinal after five years with the Bengals and a year with the Browns.  Another popular player, Frostee started 7 games, registered 5 sacks and 23 tackles for Arizona in 2014 wearing No. 98.  Let's hope Frostee puts the big chill on our opponents this year wearing his new No. 92 — his old number from his Cincinnati and Cleveland years and Dan Williams' old number.

Which brings us to the current owner of the jersey with the BIG NINE-EIGHT.

Corey Peters comes to the desert after five years as an Atlanta Falcon where he registered 145 tackles and added 11 sacks.  Peters is expected to be part of the defensive interior line rotation for the Cardinals this year.

Have more to add about the players who've worn No. 98 for the Cardinals?  Please don't be shy and pictures are always a welcome bonus.