With 97 days remaining until the kickoff to the season, let's take a look at who's worn No. 97 for the Cardinals then vote for your favorite

As we go through the 90's — jersey numbers that is — we notice there aren't that many players to have worn jerseys numbered in the 90's for the Cardinals (or the league for that matter).  Largely because this range of numbers is relatively new to professional football — although we can't speak in detail about the period prior to 1950 where there is evidence of at least a few like Marshall Goldberg (99) who wore the highest range numbers.

We do have a group of Cardinals however (all defensive players of course) who qualify today as we look back at players who chose to wear No. 97 for the Big Red.

Things got better for the jersey when Simeon Rice (pictured above) changed from the number he wore as a rookie (79) to 97 in '97.  Makes sense, right?

It's not a stretch to think of Rice as the one of the league's first true 'pass rush specialists'.  In five years in the desert Rice collected 51 1/2 sacks, 177 tackles and 7 fumble recoveries.  Although he couldn't be called a 'run stopper' by any means, Rice often times played alongside Eric Swann (98) and Mark Smith (93) which helped.  It was a great defensive line, but oh what could have been if only ...

Fred Wakefield (2001-2006) was hardly what could be called your average professional football player.  Standing over his peers (6'7, 288 lbs), Wakefield was tried at three different positions in his five years with the Cardinals.  Not surprisingly this required three different jersey numbers.  His first three years as a defensive end (No. 97), followed by a year off due to injury, then the move to right offensive tackle (No. 78) and finally ending up as a tight end (No. 87).  I also seem to recall a number of blocked kicks.

The Cardinals hoped that Calvin Pace (2003-2007) would be the next Simeon Rice but it didn't quite work out that way.  The only thing in common was that  they both wore jersey No. 79 in their rookie years.  Pace accounted for 14 sacks and one interception in his five years in Arizona.

Bryan Robinson (2008-2010) was a popular player who wrapped up his 14 year NFL career with three seasons in the desert adding 46 tackles to his career total of 307 while Stewart Bradley (2011) was here and gone. 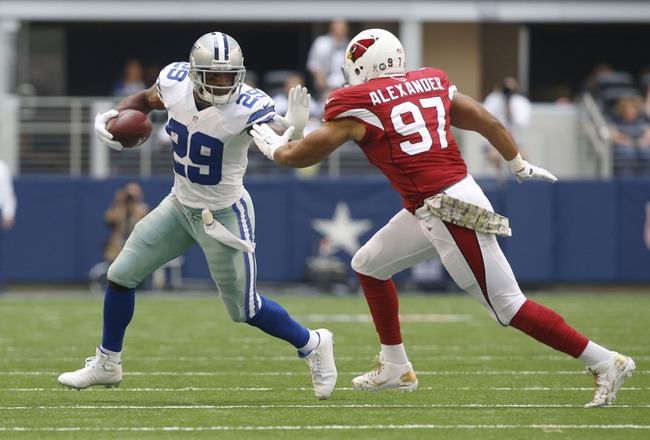 Lorenzo Alexander enters his third season on the Cardinals roster (which is always subject to change) after six years as a Washington Redskin.  Alexander is credited with one sack and 15 tackles in two years in the desert.

Alexander would like to have a bigger role in the Cardinals defense and willing to do whatever it takes according to this article.

Please help us fill in the gaps after you vote for your favorite No. 97.