Conrad Dobler truly did his part as a member of the most 'Elite' of 'Elite' offensive lines in NFL history and made quite a name for himself.

Yet another day closer to kickoff as we remember those who wore No. 66 for a franchise that traces its history back to the end of the 19th century.  There's really only one player who is truly notable today (and that's an understatement) so we'll get right to it — other than to say we're now only 23 days away from the team's first training camp practice.

As usual, we'll list all the players that have worn today's number chronologically making note of those players that mattered along the way while leaving plenty of space for your comments below to fill in the gaps after you vote on who you think has worn the BIG SIXTY-SIX best for the Cardinals.

Ed Listopad (1952*) was strangely enough the only player named Listopad in the history of the National Football League.

And now for a member of that 'Elite' Cardinals offensive line of the mid-70's who made quite a name for himself.

When it came to protecting his quarterback no matter what, Conrad Dobler (1973-1977) deserves the highest acclaim allowable — 'Elite' even.  And if 'no matter what' happened to be shall we say 'outside the box', then 'so be it' was Conrad's motto because nobody was getting to the quarterback on his watch.

Conrad had no problem living with his mean, bad-boy image — as a matter of fact even writing a book appropriately titled 'They Call Me Dirty' — 'by the most offensive lineman in NFL history'.

Hall of Fame defensive tackle Merlin Olsen finally got so upset with Dobler one game that he walked into the Cardinals' offensive huddle, waved his finger and said bad things to Conrad, then walked off the field, never to return.

I remember that game in Los Angeles well because I was there and also because the Cardinals trailed 21-6 in the third quarter and then methodically went about 'business as usual' — winning 30-28 with a field goal as the gun sounded just according to script.  The Cardiac Cards earned their new nickname by finishing 11-3 that 1975 season with 7 of those victories coming inside the last minute of play.

Olsen later got a measure of symbolic revenge by placing Dobler's name on a headstone in a scene from Olsen's TV series 'Father Murphy'.

And lastly, Conrad Dobler was a member of the 1975 Cardinals offensive line that allowed a mere 7 quarterback sacks, and lined up between fellow linemates Tom Banks and Dan Dierdorf (three abreast) in three consecutive NFL Pro Bowls.

The player that now wears the BIG SIXTY-SIX has broken the streak of One-Hit-Wonders* and likes to wear makeup. 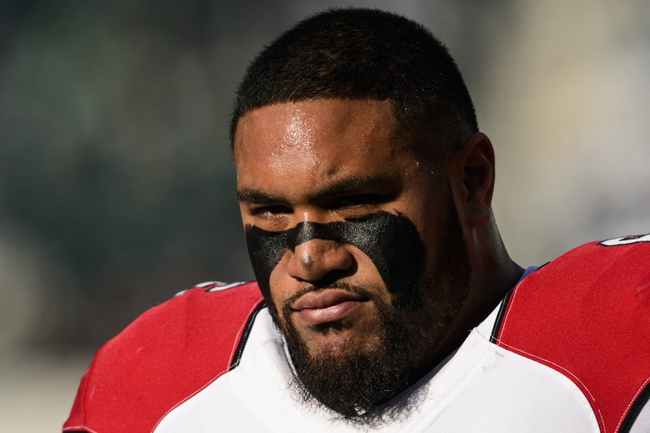 Alameda Ta'amu (pictured above) goes into his third season with the Arizona Cardinals with 21 game appearances (3 starts), no sacks, 5 tackles and 2 assists.  Let's hope that Alameda is healthy this year and has a great season.  We're pulling for you Mr. Ta'amu.

As usual, keep those comments flooding in after you vote for your favorite BIG SIXTY-SIX.