Our receivers can't separate right? That's been the common theme recently on Twitter and in comments here. That we aren't making plays down the field and have to settle for checkdowns to move the sticks.

It's an idea that's picked up steam through our 3 game winning streak where against some poor defenses it has been our running game and running backs we leaned on. There have been some nice pass plays in there for sure, there were a couple against the Saints, but generally they have been a rare treat after being fed a staple of passes short of the chains. It's impossible to tell from regular TV coverage what the real story is because of the angles and because we all follow the ball, so I went to look at All 22 for the Saints game to see what the story was. 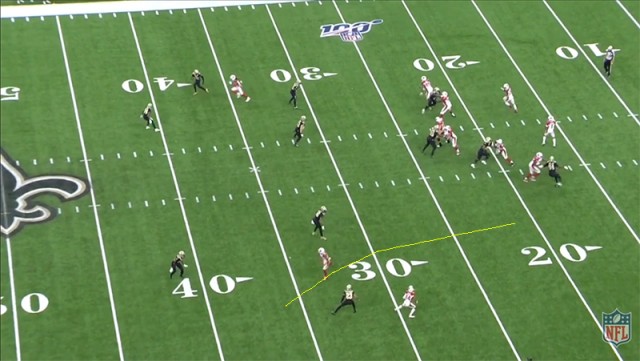 This is our first drive of the game, if I recall it's our first offensive play of the game. Kyler takes the snap in shot gun, has a clean pocket and takes the quick pass to Edmonds behind the LOS. Edmonds runs for around 7 yards out of bounds. But as you can see, there is an relatively easy pass to Kirk from the slot. The Saints are playing zone and Kirk goes untracked. The outside corner (#23) follows Byrd on the comeback, the linebacker passes Kirk off to the safety but the safety is way off and Kirk has a bunch of space to run into. A perfectly placed pass here is a huge gain, or possibly a TD because as this picture was taken the safety is static and Kirk is full speed.

Kyler checked this route first while Kirk was inside the 25 yard line, then scanned right before checking down to Edmonds. If he came back for a 2nd look while he had time the opportunity was open. 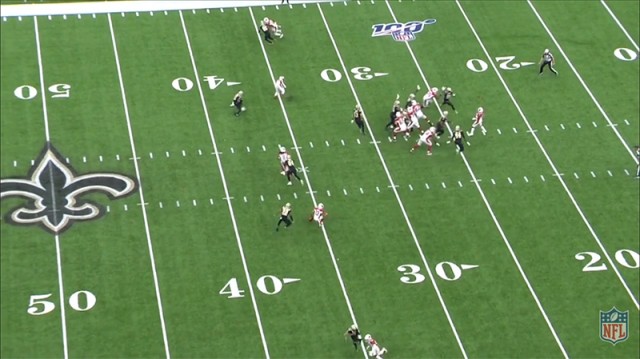 This play was on 3rd down and you probably recall Kyler lobbing one up for Sherfield that hit his hands at full stretch and bounced off. I have to put this one on the O line, as you can see Pugh and Hump messed this one up. It was very much more on Pugh who bit on a linebacker inside who didn't blitz and left Hump to block 2 guys, none of which he blocked. Kyler had to make a quick decision but chose the toughest one of the 3 he had. Edmonds is open on the 35 for what would have been a 1st down. A tougher pass but still preferable is Fitz on a slant with a yard on CGJ and no safety. A tough throw for sure, but he went with his 1st read. With no safety there and on 3rd down Fitz should have been the 1st read. 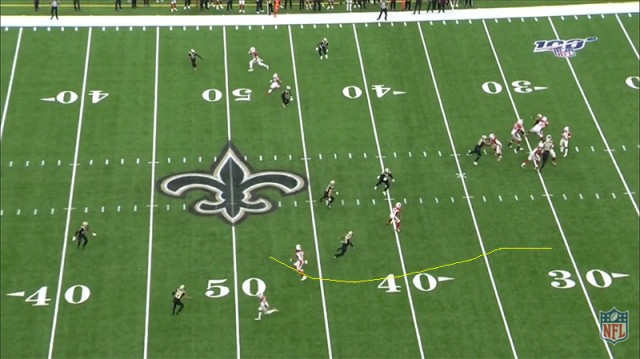 This one was really frustrating to watch. It's the first play of our 2nd drive down 10-3. Fitz and Kirk line up side by side in the slot with Byrd outside them. When the play starts they cross, Kirk running a 5 yard comeback route and Fitz running a post. Both linebackers and the slot corner bite on Kirk and leave Fitz free. The image here is taken a fraction after the ball is thrown, but while still in Kyler's hands all 3 defenders have already left Fitz and keyed on Kirk. Fitz is right there in Kylers field of vision and if it puts that ball towards the Saints logo at mid field Fitz has one man to beat and a big gain. 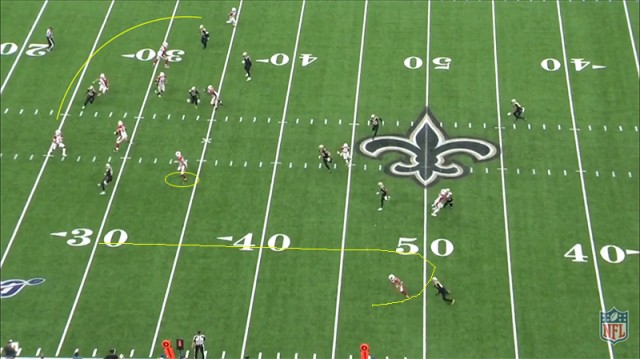 This was the worst of the bunch. You will recall it from the blatant intentional grounding penalty that came on our 2nd play of the 2nd half. Kyler takes the ball under center while Edmonds is lined up at receiver. Edmonds runs a jet sweep, Kyler throws a fake pitch to him then bootlegs out. I have no idea how it got to intentional grounding from here.

He has Edmonds for a TD on the far side clear as day. He continues his jet sweep and nobody tracks him, what's worse is Kyler never even looks for him. A simple pass out to the 40 and Edmonds gets a 70 yard TD catch and we go up 13-10. There's a chance the FS makes it across but I'm going to take Edmonds in that race. As a 2nd option he has Sherfield on a curl coming back to him for a 15 yard gain with a 3 yard cushion. And last but not least he has Clay for a short 5 yard dump off with easily 5-10 yards more there after the catch. Instead he dithers, allows the defenders to close and throws it into the ground putting us on 2nd and 20.

I gave up at this point because within our first 4 drives of the game there were multiple plays where receivers were open, often wide open and just weren't picked up. What I saw between these plays was a lot of premeditated passes that fall into two categories. Passes where the ball is out so quickly it can't be anything other than the play design and plays that look like regular multiple option passing plays but where the downfield receivers never look back for the ball, only to block the DB after a short pass.

I came into this article intending for it to be about Kliff and some conservative play calling that leads to a bunch of short passes that all receivers would struggle to separate on, and they are there. I'd say 40% to 50% of the passing plays from the Saints game were designed for the quick short pass. But you need those passes for balance, if we aren't leaving yards on the field and taking short passes when bigger gains are open those aren't an issue.

There are ample opportunities for big plays where the receivers are getting open and Kyler is taking the more conservative option, especially against better defenses. I don't know where the blame lies for that, whether Kliff is leaning on him to play it safe this year or if it's Kyler's choice, but for sure there are some easy passes he is just not seeing as highlighted in play 3 and 4 above.

Either way, receivers are not the problem. Drafting CeeDee Lamb or any other WR with big holes on both lines would be gross neglect. Especially with Butler and Isabella still to come through next year. Statistics back this up with Next Gens stats on receiver separation showing we don't have an issue.