Hello everyone, this past weekend there was a 7 round mock draft that had GM's from all 32 teams from SB Nation communities. This has been going on for over a decade, and this year I was asked to draft for the Cardinals. It started off with a chance for everyone to do some pre-draft trades. Then We did a full 7 round draft and UDFA selections, although only about half the GM's showed up for UDFA. My main goals were to address the DL, WR, and EDGE while adding depth throughout the roster. At the time of this draft AJ Green was not re-signed, so that had an impact.

Isabella needs a change of scenery and I was quite happy to be able to get a 5th round pick for him.

I wasn't initially planning to trade down pre-draft, but the Lions came to me with an offer that I felt I needed to take. I had expected all the top EDGE and WR to be gone before our 1st, and I didn't want to have to reach for one or pass up either position. Reynolds would replace Green at outside WR and as a nice deep threat with good size. Onwuzurike was a 2nd round pick last year, so he has 3 years left under contract. This is important as our top 3 DE of Watt, Allen, and Dogbe are all only under contract for 1 year. Being able to add to the WR and DL group pre-draft allowed me to zero in on drafting an EDGE with one our two 2nd round picks.

I was shocked that Olave lasted to 1.23 and it was bittersweet that I no longer had the pick. At the end of Day 1 there were quite a few prospects remaining that I liked, so I considered trading down again.

After discussion with a few team, I decide to trade down 12 spots with the Vikings. There were offers from teams farther down, but I didn't want to risk missing out on a fringe 1st round prospect. It was a tough choice to pass on Green and Ojabo, but it was needed in order to add depth to the roster. The trade gave me a 4th round pick and improved our 3rd which would be important later.

Ebiketie Is a great athletic EDGE prospect who has a chance to be a late 1st round pick, so I was happy to land him at 46.

Jones is a steal at 55. He would instantly compete with Rashard Lawrence for the starting NT position. I had hoped to land a WR or OG here, but I couldn't pass up the big boy. Not only did Jones run a 4.92 at 325 lbs, he also tested well in agility drills, vertical and broad jumps.

I ended up trading out of the 3rd round for a bundle of 4th round picks. This was a tough one. There were some good prospects left at WR and OG, but the chance to address 4 positions won out. I did try and trade back up into the late 3rd for falling prospect, but I couldn't get any trades worked out.

I double-dipped at EDGE with Sanders falling to the 4th. I was shocked he fell this far and couldn't pass him up. Golden and Kennard are both only under contract for 1 year, so grabbing 2 EDGE does work.

Bellinger is one of the most underrated TEs of the draft. He is a good blocker with reliable hands and has the athleticism develop into a receiving threat.

Strong is a small school RB who would fit as a fantastic compliment to Conner. He ran a 4.37 40 yard dash and is a serious threat with the ball in his hands.

Mathis is a tough, hard hitting athletic CB. He is athletic enough to survive outside, but is probably best suited for the slot or possibly as a SS. This is important since our top slot CB Byron Murphy and starting SS Jalen Thompson are both going into the final year of their contracts. He could serve as a replace for one after a year of development.

Picked up an extra 7th to move back 3 spots and I did not miss out on who I would have drafted at 134. Toure spent most of his college career at Montana before spending his last season at Nebraska. He is a under the radar home run hitting deep threat. He averaged 19.5 yards per reception last year and was able to burn an Ohio State DB for a 72 yard TD. He would replace Kirk's field stretching deep threat ability for his rookie year and can develop in into a future starting WR.

I didn't plan to take another DL, but I have a late day 2-early day 3 grade on Carter and couldn't pass him up. at sub 290 lbs he would begin as a rotational DE with a chance to be more in the future with Watt, Allen, and Dogbe being on the last year of their contracts.

Delance was the last OT I had a 5th round grade on while I had two OG with a similar grade, so I went with him first. He would compete with Josh Miles for the OT4 spot.

Traded two 7ths for a late 6th to grab a falling OG. Suns meme's aside, Paul is a very athletic OG who could develop at either OG spot. I had a late 4th-early 5th on him, so I made sure to trade up and get him. td {border: 1px solid #ccc;}br {mso-data-placement:same-cell;}

Athletic local guy who has inside/outside flexibility. Jack Jones went 2 picks earlier and it scared me at first since I saw the school before the player.

Houston is one of the best small school WR available. He would have a chance to make the roster as a developmental outside WR behind Reynolds.

Only about half of the teams showed up for the UDFA selections. It worked like an extension of the draft as we just picked player according to the original draft order. Teams had a 90 player roster limey which meant we were able to pick 13 UDFA.

SS: The Cardinals have not re-signed any veteran S yet, and 2/3 of our top 3 SS are on the last year of their contracts (both Thompson's). Adding depth at the position was wanted, but there wasn't a good opportunity in the draft so I added two UDFAs. Griffin and Hill are both athletic (9.11 and 8.64 RAS) and have a chance to make the team on ST play.


CB: Hood was the last pick of my UDFA. He has 4.4 speed while being 6' tall. He would probably not make the 53 and instead be put on the practice squad.


DL: Elijah Garcia is a long and athletic DT. He is 6'5" with 35 inch arms which makes for a good developmental DL. Likely a practice squad player due to other DL additions.


LB: Kelly is an tough and athletic LB from the Chanticleers. His agility isn't great, but he is tough in the running game and always puts in the effort. Has a chance to make the team on ST play thanks to his good speed and explosiveness.


OL: I wasn't able to grab a C in the draft, so landing one was an early priority in UDFA. I had hoped to land Deaton, but that didn't work out. I was glad to land my 2nd choice in Wattenberg. Wattenberg is another great athlete with a RAS of 9.59. He would need a year to get stronger and add good weight as he is only 299 lbs, but he has the frame to add it as he is 6'4. Carter was a senior bowl standout and I was surprised he wasn't drafted. He was an OT in college but will move to OG in the NFL. Clayton Bradley might have to move to OG due to his poor agility and sub 34 inch arms. Wattenberg and Carter have good chances to make the roster, but Bradley is probably a PS candidate.


RB: I am a huge fan of Koback. He was a big play machine at Toledo and tested well at his pro day. He would compete with Ward and Eno for the RB3 and RB4 spots.


WR: We lacked depth at Outside WR so I made sure to add a few in UDFA. Winningham is a big small school WR. He has the skill set and athleticism to succeed at either outside position. His good hands and blocking certainly help too. Polk is another Outside WR although he is stuck as an X WR. Despite his poor athletic testing, he is still drawing praise from NFL scouts and seems likely to be drafted. Virgil is a 4.3 speed returner which give him a good chance to make the team. 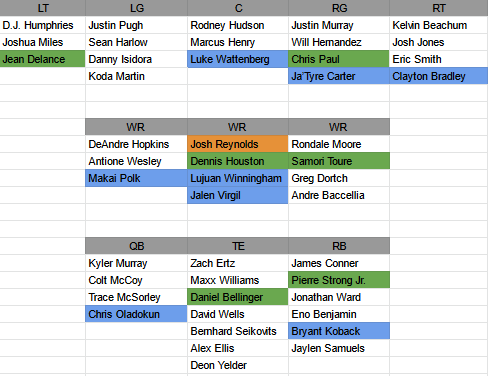 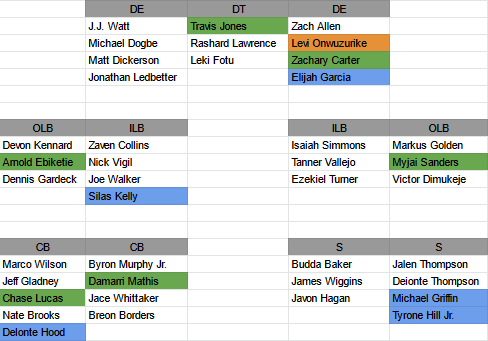